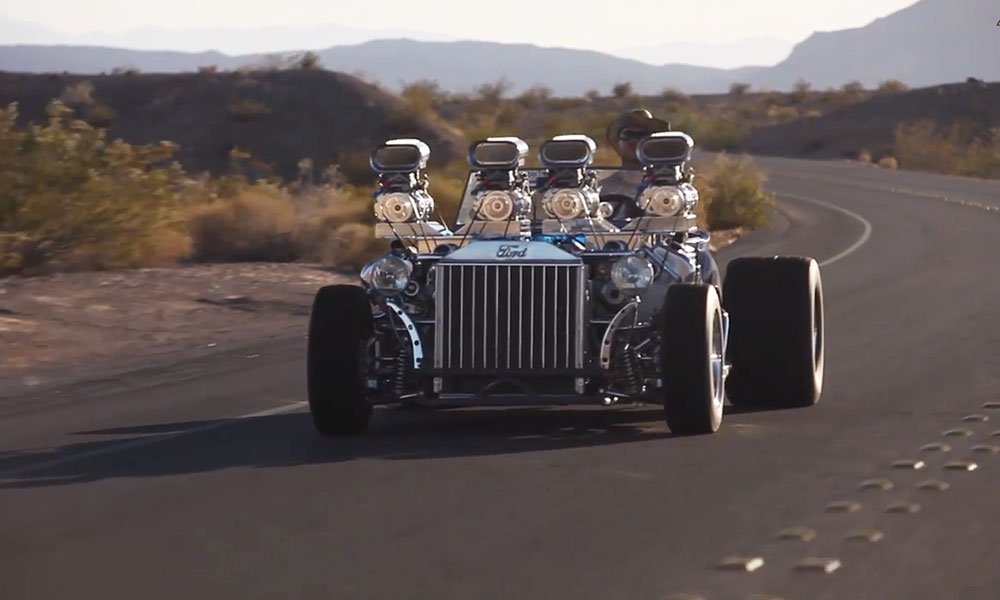 For a select group of custom car builders, there’s no such thing as too much power. As long as the final product can move on its own without killing the driver in an A-bomb sized fireball, then she’s good to go. Such cars are all about the challenge of building and engineering — like this homebuilt roadster from a New Zealand madman with one Ford body, two V-8, four superchargers and 1,200 horses barely contained by the frame.

Tronson once raced Funny Car dragsters, and has said the idea for the car he calls the Double Trouble came to him out of the blue. Built over six months with nothing fancier than welding equipment and bent metal, Tronson acquired two Ford 4.6-liter modular V-8 racing engines, and stacked two B&M superchargers atop a custom intake over each engine. Those tie into a Ford 3-speed via a self-designed bell housing, and the rest of the car — from its Corvette brakes to Jaguar rear-end and fiberglass body of a ’27 Ford — has a similar stirring of off-the-shelf parts with Tronson-built adaptations.

Visit his DOUBLE TROUBLE website to see and learn more about this massive hot rod.

Totally built from scratch with just an idea, no drawings or models. One of a kind.

Under floor brake and booster with 2lb residual valve front and back.

Ignition: Pro Com CD system, distributors are new magnetic pick/up type 1939 Ford flathead  V8s replicas, custom made adaptors on back of blocks driving through the valve cover  connecting to the overhead cam shaft on each motor via slotted end.

One starter motor per engine, which start both engines together.

The Owner/builder is Gordon Tronson of Las Vegas, Nevada.  He was originally a Hot Rodder from Napier, New Zealand.

One of Gordon’s first creations was a Lamborghini Countach replica fabricated entirely by hand.